The Laphroaig – A Journey from Water to Whisky

Premium Whisky
The Laphroaig – A Journey from Water to Whisky
January 22, 2016 by Sandeep Arora in Premium Whisky 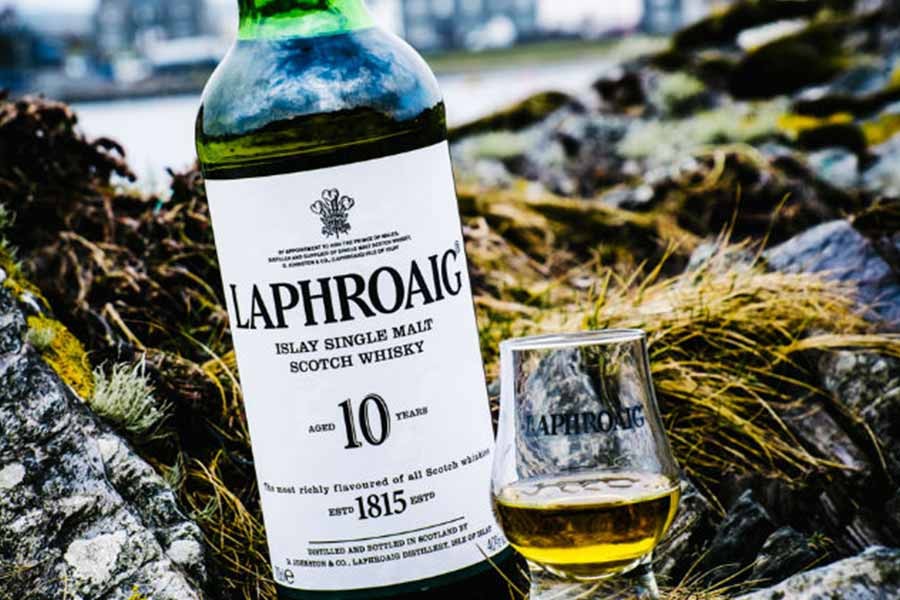 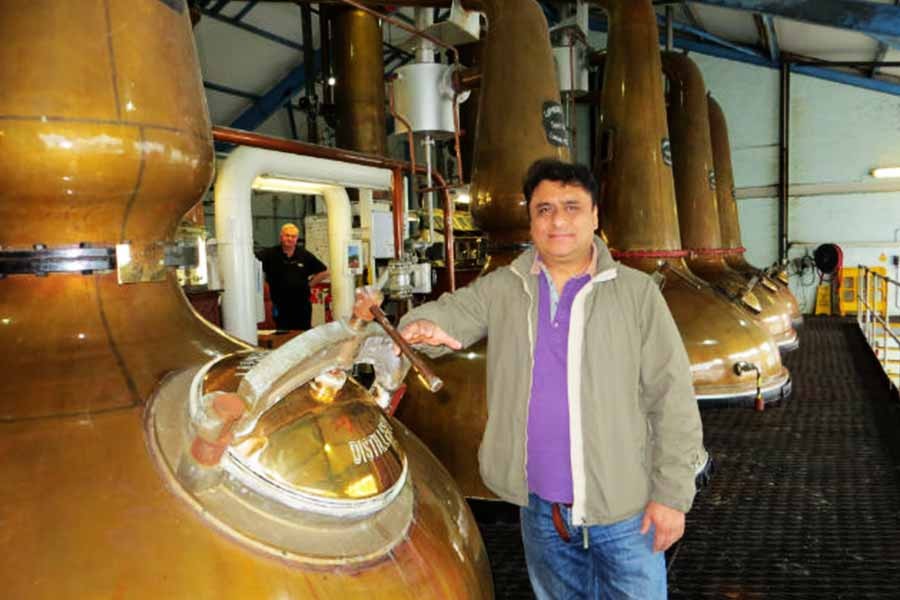 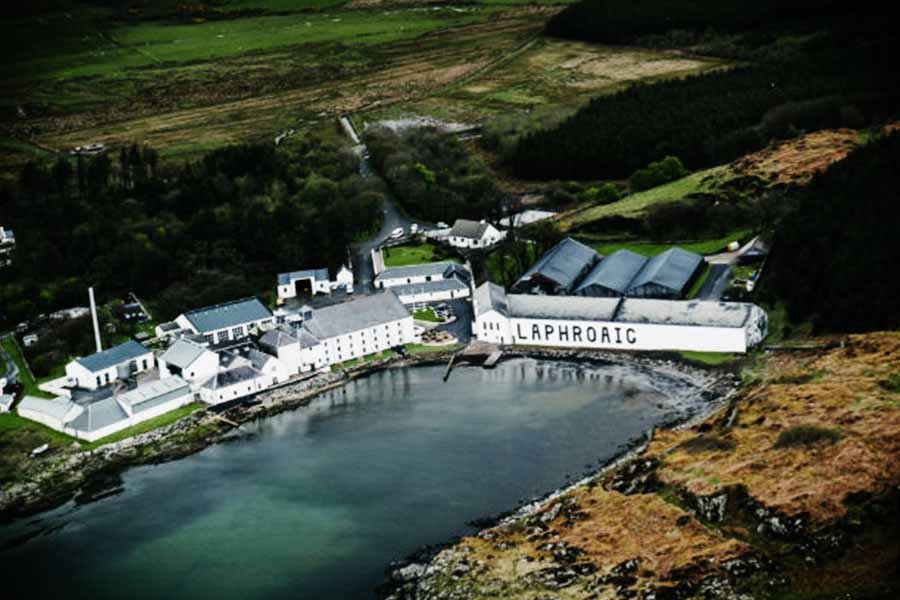 This journey took 200 years in the making, since 1815. For the day to arrive, it took water “wars”, ownership battles, forces of nature, craft of whisky making, idyllic Islay surroundings and A Royal Warrant, to make Laphroaig, celebrate its 200th Birthday.

Laphroaig, the intensely peaty & smoky Single malt, has been the toast of whisky lovers since decades. Laphroaig, is the world`s largest selling Islay single malt. Personally, I have been enjoying the whisky since 2003, when I started my own journey in the world of whisky. Its quiet, confident & assertive taste, hidden humour and the explosion of smoke, is enough to blow one away. Laphroaig will not step down to appease you, but you will have to step up to match its valour & vigour. Over the years, I have seen that either you love Laphroaig or cannot stand it, personally, I figure in the former.

The Laphroaig distillery was established in 1815 by Donald and Alexander Johnston, though distillation must have gone on much before that as well. It has a rich history; neighborly disputes with Lagavulin and many ownership changes. Ian Hunter, one of the subsequent owners, died childless in 1954 and left the distillery to one of his managers, Bessie Williamson. The distillery was sold to Long John International in the 1960s, and subsequently became part of Allied Domecq.

The distillery remained within the family until 1972 when it was sold by Bessie Williamson. She was the last of three of the family’s women to have managed Laphroaig. This list includes Catherine Johnston, who was the first woman to ever run a distillery in Scotland. The brand was acquired by Fortune Brands in 2005, as one of the brands divested by Pernod Ricard in order to obtain regulatory approval for its takeover of Allied Domecq. Fortune Brands then split up its business product lines in 2011, forming its spirits business into Beam Inc. Beam was then purchased by Suntory Holdings, A Japanese firm, in April 2014

The invitation from Laphroaig arrived in March 2015. The Laphroaig Teams in New Delhi, London & Scotland, had created a fabulous celebration plan, which started with spending the first night at Cameron House, Loch Lomond, near Glasgow. Cameron House is a centuries old Estate, in the middle of Loch Lomond National Park. Surrounded by a few hundred acres of woods, Cameron House is on the side of Lake Loch Lomond, overlooking the mountains. Rooms appeared straight out of a 18th century Hunting Lodge, with Scottish Tartan to match.

The party started as soon as 20 of us, from over 15 countries, arrived at almost the same time. After settling in, I went for a long walk and discovered that besides being a famous hotel, Cameron House is also home to a Boat & Yacht Club and had some of the most famous restaurants, manned by some great Chefs. It was one of the most refreshing walks in my life with fresh air, chirping birds and soothing sites, ensuring that I was ready to partake of the pleasure of a Laphroaig paired Dinner. Over Smoked Duck, Scottish Salmon and Pine-nut Risotto, generous amounts of whisky, exchanged hands. The Dessert set the mood for a post dinner Tasting, as it was a Laphroaig infused pudding, quite amazing and bought out the balance in whisky flavours.

Next day after an “Estate Breakfast” of Sausages, Bacaon, Black Pudding and Haggis, we set out towards Islay in a Sea Plane, which was moored at the Loch Lomond. The plane was a small 9-seater and we were briefed about the standard flying procedures, which remained more or less the same, except that we all seemed huddled all over the pilot.

The “Water to Whisky” Tour had begun…!

Even though, I have been to Islay several times, over the last decade, very little seems to have changed. A small airport, long winding roads, few people (only 3000 on the entire Island) and lots of happy sheep & smiling ducks for company, in summer.

This was the first that I saw the landscape of Scotland from so close, or rather such low height. It is surely, the most beautiful place on Mother Earth. Abundance of water bodies, fresh green hills, clear blue skies (we were lucky) and sheep dotting the landscape. In just about 30 mts we were hovering over Islay and saw Laphroaig Distillery from top, the first view of a Grand experience laid out for us. After checking into typical island hotels, we went to visit the water source of Laphroaig, Loch Kilbride, located just a few miles from the distillery. The walk to the Water Source was cold, windy, wet and slippery. Walking over a wet hilly landscape, strong wind threatening to blow you over and a deep chill freezing your bones, called for a generous dram of Laphroaig. After 3 drams of Laphroaig Triple Wood, we were able to communicate once again and take in the fact that we were actually standing at the source of what makes Laphroaig, the mighty Peat Monster. My personal highlight was drinking Laphroaig with water from the source, water that makes Laphroaig …a first one for me! Indeed a stunning experience and a life long memory. Post lunch, we enjoyed tasting of the finest expressions of the whisky, though I was quite surprised that Laphroaig has only 10 expressions. The tasting was conducted by John Campell, the Distillery Manager & Vicky Stevens, who looks after the Visitor Centre. The highlight was describing the whisky in one word, written on a bung (cask stopper) with one`s name. This would be placed on a new cask in the distillery. I did suggest returning the Bung back with the cask in tow, even after a few years, but all I got in return was a warm smile from John :}}

Dinner was a “Formal” affair, with Islay Formals – Suits, Jackets, Jeans, Winter Longs, Open shirts, Polo T`s all contributing to the attire. Over Smoked Haddock, Lamb Chops, Jacket Potatoes, Pork Belly and an Oat pudding, we paired Laphroaig expressions, including 10 YO, Triple Wood, 18 YO and a new release.

Yachts transported us to Jura Island next day, where a Seafood Lunch was in attendance. Jura remains frozen in time. I had last visited Jura in 2009, though nothing much seems to have changed since then. Whisky was enjoyed to keep out the cold, to bring in the warmth, to share a dram with an old friend or break open a new conversation, just about for anything, but mostly to keep away the strong gale and wind chill.

The ride back was as exciting as we compared notes on which expression of Laphroaig was best suited to our palate…now it was Whisky on Water!

The Laphroaig Team had saved the best for last. A Beach BBQ with Whisky. On the shores of the distillery, a grand & rustic BBQ had been erected, managed by a team of local chefs. Oysters soaked in Laphroaig, followed by a BBQ with local flavours & produce, complemented the Sunset, on a lonely beach, with strong winds, next to a majestic distillery, on the remote island of Islay, Scotland.

Laphroaig provided memories of a lifetime, to 20 people, who came as strangers, but parted as friends…Friends of Laphroaig.