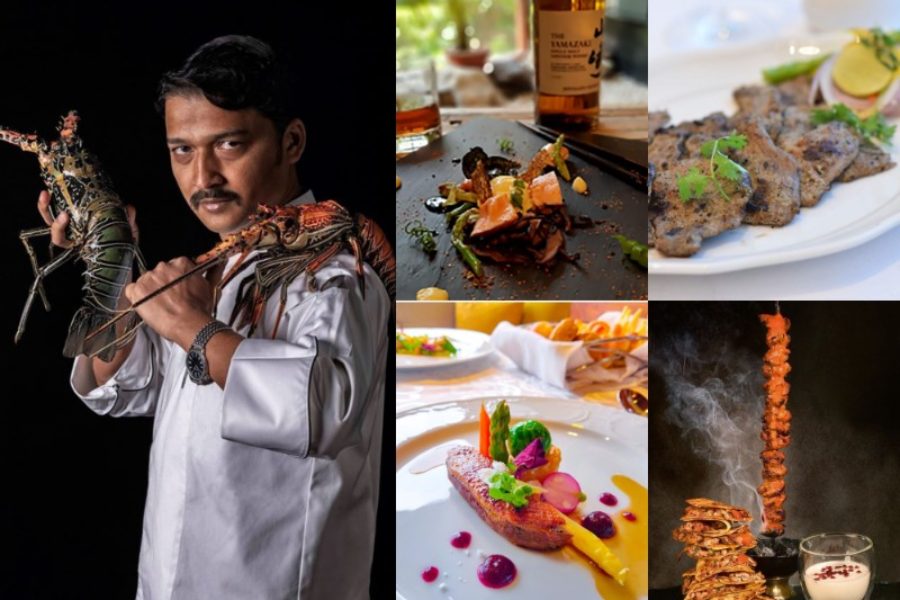 Amongst Life’s most fascinating experiences is matching whisky flavours with food aromas, which either enhances one taste or contrasts with the other. World’s favourite tipple, Whisky, speaks a common language of appreciation, when it is matched with Food, which is now being offered from global tables, tribes and traditions. From a humble beginning at elitist tables, with a small group of enthusiasts, the concept has come into its own. Nosing & Tasting notes of single malts & airing with matching flavours is increasingly being adopted across India. People in India are now approaching this concept, far more than they did a few years back. Drink Less, but Drink Better seems to be the new motto!

I had introduced India to the art of Whisky pairing with Food, way back in 2007, when we paired a 16 course meal with whiskies. We had a lot of learnings and mixed experiences. Though, over the years, I felt that different single malts with their distinctive flavours, were a good pairing with Indian Cuisine. We worked with various styles of whiskies & felt that most whiskies were quite complementing.

Indian Food is as old as mankind itself. Spices, herbs and fresh ingredients, have been an integral part of India, since a few centuries. Whilst the rest of the world was still being discovered, food in the Indian sub-continent was already being appreciated. Legacy of the rich Indian culinary culture, are an integral part of the World Food History. Recipes are passed down generations & mothers & grand-mothers guard family recipes in lockers, to be handed over to the new generation. It is not unusual to dine on dishes in traditional Indian homes, which have been prepared with recipes handed down generations as early as 18th century.

Interestingly on one hand, whilst Indian food gains a global footprint, a new revolution is taking place back home, wherein Chefs are redesigning Indian food and bringing out, what we will call The Modern Indian Cuisine. Modern Indian Cuisine highlights the traditional Indian dishes. It captures the primary flavours, accentuates certain ingredients and presents the dishes in a more contemporary manner. To create a distinction, the presentation is more distinctive and appealing. In India, Chefs are experimenting with ingredients, flavours & above all presentation, to lend a fresh new look to the food. Some Chefs also feel that Vegetarian Indian food goes do well with whiskies. Whilst in the Southern part of  India, Chefs are passionate about spice & herbs and want them in the fore front, they are not sure if they want to pair the same, in North India, pairing is widely accepted, so much so that Whisky & Food is paired with food most times.

The sensory experience is enhanced with a visual treat with matching shades of food colour going well with the golden & copper hues of whisky. Sometimes the flourish & the swish of the whisky, lashing the glass settles almost reluctantly to balance the great tasting dishes. A good looking Bar or Restaurant, crispness of the service, adds to the over-all dining experience. Whisky is serve in small measures & enjoyed Responsible Drinking.

Whisky is a great match for seafood. The lighter style Whisky goes well with Smoked Salmon. The tanginess of the Orange compliments the smoked almonds & the peppery spice flavor of the Whisky, with the Beetroot complimenting the smoky finish.

Finish is sweet vanilla, clear finish with, hint of cinnamon

Pairing Logic – A chef’s signature at Edo, Buta Kakuni is well balanced dish in terms of taste, moreover the slightly sweeter after taste. This enables Yamazaki to pair well, as it provides an initial fruity note to the palette. Also the delightful after taste of Yamazaki which complements the pork.

Pairing Logic – The Kakori Kebabs are a delicate melt-in-the-mouth kebab of finely minced lamb, flavored with cloves, cinnamon and char grilled; served with a sprinkling of saffron. The dish pairs well with peppery & soft smoky flavor notes, as it is prepared atop embers of charcoal.

Pairing Logic – Sikandri raan is whole leg of lamb, slow cooked in its flavour with notes of malt vinegar & red chili. This robust meat is fragrant on the nose with tarty notes from vinegar and aromatic black cumin. A heavenly match made in the cask and tandoor, it paires well with the Talisker 10 YO, with its bonfire of peat crackling and black pepper on the palate, with robust flavours of charcoal smoke. With sharp notes of vinegar and rubbed spices the blend of Sikandari Raan and Talisker is an orchestra of robust and bold flavours on the palate.

Pairing Logic – A rare kebab of lotus seeds and stems cooked on a wooden skewer, flavoured with fresh herbs,mace and green cardamom. Grilled on skewer and sprinkled with aromatic masala. This vegetarian kebab, though high on spice is balanced well due to the sweetness of the lotus stems and has the perfect bite for some good whisky on the side. The layered notes of oak, marzipan and cinnamon are a good foil to the complexity of the kebab and carry the whisky well as a worthy companion.

very beautifully. Once it goes on a grill it mimic the Smokey flavour of the Bourbon. So both classic match the flavour and come out as a perfect duos. With the steak go with straight (neat), on the rocks or may be a light cocktails so it should not disturb the flavours of meat.

Pairing Logic – This whisky is well rounded in the nose with chewy sultanas. A touch of fudge and gentle wisps of smoke. The palate is also full with richness of chewy tannins. It finishes long and dry with spicy oak notes.

Pairing Logic – Since the pie in itself has a mélange of textures we induced the flavor of the whiskey to enhance the sweetness to complement the sourness of the lemon juice and zest. The tart and creamy lemon custard filling with whiskey is topped with mile-high billowy meringue. The magic of that whipped meringue topping that went into the oven like soft cloudy pillows and came out firm and golden brown. The alcohol does not evaporate much as the custard is covered with meringue which can be torched as well. So, there is a burst of flavors as one tastes the pie.

Pairing Logic – Indian Accent Chicken Tikka Quesadilla, Pink Peppercorn Raita combined with Talisker 10 YO is one of the food pairing which works extremely well. The well rounded flavours from the fresh ingredients used in the marination and smokiness from the tandoor wrapped in Tortila sheets with pink peppercorn Raita is one of the combinations which makes the pairing with whisky a wholesome experience on the palate.

with balanced honeyed sweetness along with notes of citrus and vanilla. The other adjectives that I can think of describing this popular whiskey would be creamy, delicate, smooth, fruity, clean and fresh. This is my personal favourite and I think it’s honey and citrus notes will really compliment ricotta cheese and berries. The simple yet delicious blueberry and ricotta tart will marry very well

Pairing Logic – Note: With a fruity flavour and a palate of tangy marmalade, creamy vanilla toffee and toasted smokiness this peated malt is my most preferred dish to pair with the smokiness of the lamb chops which is  complimented by the charred dauphinois.  The subtle smoothness of the delicate edamame and truffle with the tang of the pan jus that has a hint of tomato offers a balanced match.

Whisky – The Glenlivet 18 YO

Pairing Logic – One of my absolute favourite pairings is the Sikandari Raan at Aasmana, the rooftop Indian bar and lounge at The Ritz-Carlton, Pune. The sweetness of whisky combines well with spices used to braise the lamb and also the smoky flavor of the meat

Whisky – The Glenlivet 21YO

Pairing Logic – The sweet smokiness of the Lamb chops has a lively freshness that announces itself to the long and delicious notes of honey, vanilla, pressed apples and a little cinnamon imparted by The Glenlivet 21 years. The delicate creamed spinach flavours are beautifully punctuated with the firm sherry notes of The Glenlivet 21 years. The unique combination of butternut squash and glazed potatoes, punctuates the texture of the lamb with a gentle spice on the palate, on the finish.

Pairing – The sweetness of bourbon complements well with the Smokey flavours and nutty flavours of the wood oven baked cheese soufflé, along with the delicate and sweeter flavour of the caramelized leek and thyme, the recipe just turns divine and scrumptious! Whiskey and cheese can come together for a killer dinner in this recipe of Camembert soufflé! This dish is one hundred percent deliciously crave-able!

Pairing Logic – This meaty, hearty dish follows the cooking technique of Japanese cuisine where it goes through an 18 hours slow-roasting process and is then grilled right before it goes onto the plate. The sweet teriyaki sauce

flavoured with star anise seeds and ginger adds to the taste of the meat. The smokey whisky with lingering sweetness and woody notes complements this dish perfectly.Enjoy Responsibly !