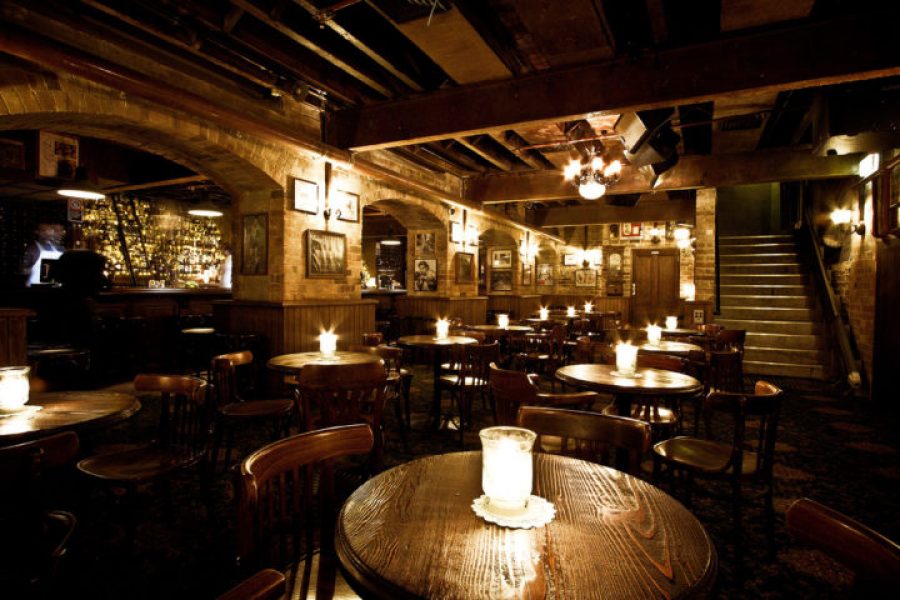 Welcome to the Best Whisky Bar in Australia ! On Aug 27th 2018, the prestigious Icons of Whisky Awards declared Baxter`s Inn the finest Bar Experience in Australia. The Baxter Inn was the brainchild of Anton Forte and Jason Scott.

The name is taken from the leader of a Boston gang called ‘The Winter Hill Gang’. These guys ruled the suburb of Somerville Boston for years, with a movie made on the story called ‘Black Mass’ starring Johnny Depp. The leader, a man by the name Whitey Bulger fled prior to an FBI bust after a tip off and went on the run for years, being second on America’s most wanted behind only Osama Bin Laden. Whilst on the run he used a few aliases, one being Thomas Baxter and later Jimmy Baxter. The venue was modelled on a Boston style den of iniquity, with boxing and racing pictures as a nod to the gambling rings which he led.

Located in the basement of a building block in the middle of Sydney’s CBD, in an unmarked alleyway and down a fire escape you’ll find a bar full of people and character. The The Baxter Inn was the brain child of Anton Forte and Jason Scott, opening its doors back in 2011. Singing true to little brother venue Shady Pines Saloon (opened 2010), ‘Baxter’ as it’s known to its regulars, is difficult to find. Since its inception, Baxter has been an institution.

The Baxter Inn has featured in World’s 50 Best Bars every year since opening, has been recognised at Tales of the Cocktail Spirited Awards as Best International Bar Team and Best International Spirits Selection and a constant nominee for the Australian Bartender Magazine Bar Awards, Australian Liquor Industry Awards and Time Out Sydney Bar Awards. The Bar currently have around 1000 whiskies. I have included a copy of the latest Whisky Bible. 1000 Whiskies, 13 Gins, 30 rums, 12 Tequilas, 2 vodkas

The room features a wall of whiskies of the world, specialising in Scottish Single Malts, with two library ladders used to aid the bartenders reach, dark wooden features, exposed piping and brick walls with years of accumulated candle wax, along with a vast collection of vintage racing and boxing posters, makes The Baxter Inn look and feel a lot older than six and a bit years old. The bar itself runs for the length of the room, almost 14 metres in length.

Back to that wall of whiskies of the world. The Baxter Inn is recognised as one of the world’s best and most well-stocked bars. A letter board that is regularly updated consumes one third of the back bar, humbly only listing about a quarter of the available whiskies in the venue. The back bar is organised categorically into regions and alphabetical order, as it’s the only way to configure the amount of hooch in the venue. Along with this impressive and literal wall-to-wall feature, Baxter has an additional feature simply known as The Whisky Room, which houses the more unique, one of-a-kind and overall rarer malts the bar has to offer. The Baxter Inn can accommodate any style, preference or profile of whisk(e)y a guest has in mind, whether it be a humble $10 a nip, all the way through to an extravagance of nearly $900 a shot.

This being said, The Baxter Inn isn’t purely limited to whiskies. The bar prides itself on an extensive and interesting selection of other craft spirits, beers, wines and of course cocktails. The team behind The Baxter Inn take great pride in providing a casual and friendly style of service, all whilst being knowledgeable and professional.

In its time, Baxter has seen its name thrown amongst the best in Australia and the world.
The Baxter Inn holds no precedence, welcoming all with a come as you are policy. You can always expect a good time with top-notch drinks and service and a life time supply of pretzels.

Cocktails form a significant part of the Beverage menu.

The finest Whisky Experience is The Whisky Room, where one can enjoy from aged The Macallan`s to fine collection of Japanese Whiskies. Select Indian whiskies also find prime space in The Whisky Room. Whisky Cellar – This room was designed as a place to house whiskies that are rarer or hard to come by. The idea is that when a whisky is ordered out of here, the guest is invited inside whilst we pour the drink. It is a little quieter in here and we can explain what makes the whisky unique and give little bit more of an experience.