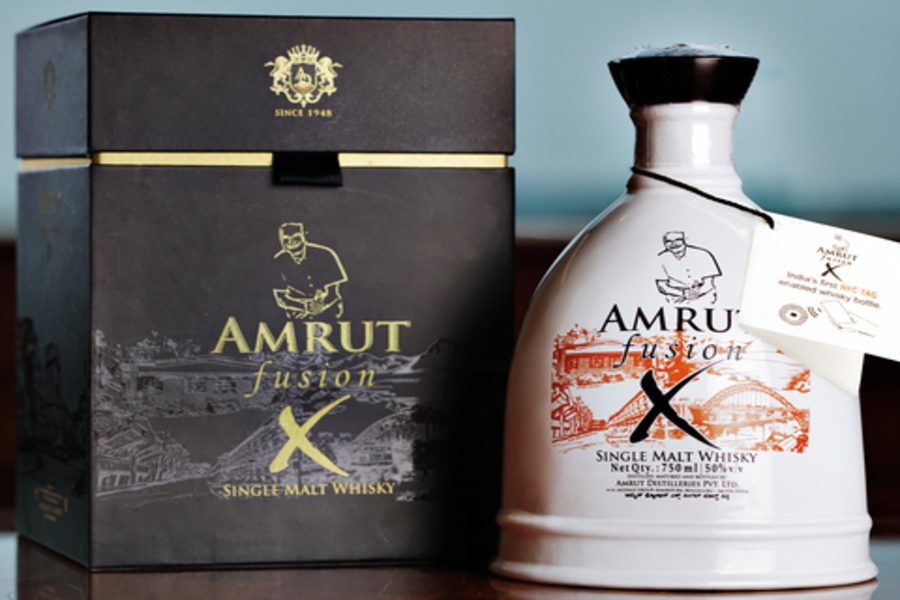 Amrut Distilleries, the pioneers of the Indian Single Malt revolution and makers of iconic brands such as the Fusion, Spectrum, Naarangi and Amalgam are celebrating the 10th anniversary of India’s flagship Single Malt Whisky – the Amrut Fusion. To commemorate this landmark day, the Bangalore based distillery is launching a special limited-edition Single Malt whisky – the Fusion X (ten) across the world on the 25th of November, 2020.

This launch is also timed to celebrate the birthday of our beloved late. Chairman and MD, Shri. Neelaknta Rao Jagdale – the Father of Indian Single Malts.

Tracing our steps back to 2009, it was our late Chairman and Managing Director of N.R. Jagdale Group, Mr. Neelakanta Rao Jagdale, who in his conviction of offering the best possible product for discerning consumers set about creating a new Single Malt. The effort and the launch of the first Indian Single Malt, Amrut, in Scotland and thereafter in most parts of the globe were instrumental in his widespread recognition as the “father of Indian Single Malt Whiskies”. It was he who defined the final character of Amrut Fusion, as he sat in his summer residence in Nilgiris, 7000 feet above sea level.  As Neel kept at mixing peated and unpeated malts in various proportions, the magical formula that he finalized that day went on to become Amrut Fusion Indian Single Malt Whisky, a much appreciated, feted and richly awarded single malt wherever it was launched across the globe.  Clearly, as the architect of Amrut Fusion, Neel well and truly gave a new direction not just to his company but to the Indian Liquor industry itself.

Coming back to the present, we have a reason to celebrate, acknowledge and remember.  Amrut Fusion X is an ode to our past and our vision for the future. The Fusion X whisky is created after further maturing our Amrut Fusion for a period of 4 years in Px-Sherry casks, adding a dimension to the whisky unlike ever before. This limited edition also deserves a special bottling, and hence this exquisite liquid is presented in a collectible porcelain bottle, adorned with a beautiful print and a sketch of Neel, crafted by one of the foremost names in ceramics – Wade, England. The cork too, has been handpicked and shipped from Portugal, while the bottle will be presented in a jacket made of lush velvet.

The Fusion X, also for the first time in India comes with an integrated NFC chip in partnership with Vlinder, which adds a great level of safety to your collectible bottle. Buyers can tap the NFC on the bottle to be indicated on their smartphones if the bottle has ever been opened, and also access a vast array of information about the whisky on a website.

Amrut Fusion X is a very limited bottling with only 1010 bottles worldwide. In India, this rare symphony will be released in Bengaluru (limited to 60 bottles) at a price of around INR 15000 per bottle and will be made available in select retail outlets.

“It’s a matter of great pride to us when people call Amrut Fusion the flag-bearer of Indian Single Malts.   Our late CMD and my father Shri Neelakanta Rao Jagdale was in fact the architect of this pathbreaking product and it gives me immense satisfaction to make this special release of Fusion X on his birthday as both a celebration of 10 years of love by consumers around the world and a tribute to his life and legacy.”

Nose: An exciting and inviting nose with an array of  tropical fruits and salted caramel transforming into toffee fudge. Then here you go; a wave of vanilla cream followed by almond paste. The phenols are a mere teaser and shy; exhibiting maturity beyond its age.

Taste: A sweet orange note transforming into loads of tropical fruits. Enormously complex on the palate showcasing the notes of dried fruits, vanilla cream, toffee fudge and an inviting oak note.The middle ground is velvety and silky and the phenols are just mesmerising and are lovely.

Founded in 1948 by the late Shri. Radhakrishna Jagdale, the history of Amrut Distilleries is as old as independent India itself. The journey started under the name and style of ‘Amrut Laboratories’. In the early years, Amrut was a leading manufacturer  and supplier of Rums, Brandy and Whisky for domestic consumption.

Amrut Single Malts were a consequential product of our organisation’s founding principles: Uncompromising Innovation, Unflinching R&D and the Undeterred Courage to always offer exceptional products to our customers. The initial chapters of this journey started when Rakshit was completing his dissertation in the UK; and as part of this project he conducted a market survey to check the acceptance of Amrut Indian Single Malt. The response was very encouraging to say the least – everyone who tried the malt were impressed that fortified our confidence leading to the launch of the brand.

The journey was extremely tough and challenging as India’s image producing quality whisky was very bad. We also had to undergo many struggles as our Indian identity did not always lead to favourable conditions in the developed world. However, we were absolutely confident about the quality we had to offer and we continued to strive and pursue endlessly our goal of bringing the Indian Single Malt to the world.